Lessons From MY Hood

Almost two years ago we moved into a neighborhood. We have always resided in the country or almost in the country, with a few acres for my chickens, cats, and gardens. From the first child down to this last child they have always thought that they wanted to live in a neighborhood amongst other children. So, at last we made the move into town – sort of. We are on the edge and still have an acre for my chickens and cats and all of dad’s trailers BUT there are also neighbors.

The bus for school stops right in front of our house so we thought he could meet all the neighbors whilst standing in line for the bus. Not so. He rides and now and then another girl rides in the mornings. Could be because it is still middle of the night when the bus pulls up but after he gets on and they go around to the next street he reports that there are about ten kids who ride in the mornings.

In the afternoons the parents line up in their cars around our house to get their kids from the bus. Sometimes they venture into our yard to pet the kittens but usually they bolt to the cars and head off into town for some kind of practice or another. We won’t see or hear a peep from them until the next afternoon.

The neighbors directly across the street ran over our mailbox the first day we moved in. The woman hopped out of her Jeep, took a look at hubby and said, “It looks fine to me.” She hopped back into her jeep and drove off. Our mail box now resembles the Leaning Tower of Pisa and they have neither waved nor spoken to us since.

So, after nearly two years of living on a busy corner we still do not know our neighbors, parties on the deck are just a dream, and having neighbor kids come over to swim or throw the football is non-existent. It makes me sad for my kids because they had so hoped for a neighborhood like the fake ones they see on television. And it is not like I am shy and didn’t try to meet our neighbors. Everyone is just busy on their own personal devices. Being an individual and personal.

I lived in a great neighborhood growing up and to this day I keep in touch with those chums on my social media platforms. We were not individual and personal. We were a small community within a larger community. We lived on a busy street not far from the school. Actually one had to cross the cotton field to get to the school but it wasn’t far.

We lived on a street with many boys. My sisters loved it because some of them were pretty cute. I loved it because they allowed me to play with them and be the tomboy that I was. Phillip Lemmons threw the football to me, in the street, at least a million times. I spent hours running around with John and Joel James. We all played baseball with Kenny and Harlan Hickey – even my sisters. We were a small community. We were back and forth and in and out of houses. Andy and Nancy Woods lived just down by the Lemmons and the Hickeys were right behind us and the Hinds were on the block over.

We grew up together and our parents knew each other. Sure there were fights and eventually we all grew up. Kenny got a motorcycle and drove across country. Some moved sooner than others but we all played baseball together in the empty lots between houses. We rode skateboards along the road by the cotton field. My sister’s boyfriend worked on cars in our backyard. We had a community.

Today, our neighbor will sit in front of his garage while the door opens, drive in quickly, sit in the car until the door closes and I can only suppose that they get out of their car and go in. Their kids are in the same schools as my kids. On the days they ride the bus, they stand apart from us with their backs turned. And yet in school, the little girl will always choose my youngest to be in her group. He says they have a lot of fun in school but she is not allowed to come over to our house.

I find it very strange and yet no one is on the streets in the afternoons throwing the football or gathering up a bunch to play baseball. Today’s kids are busy being carted off to 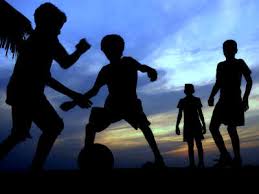 And they will get dirty and get their feelings hurt and maybe get hurt. But that is how we learned to live. Full out. Scratched, dirty, upset, broken fingers, busted ankles, ripped shirts, and a resolve to be stronger the next time. I am so thankful for my old childhood chums. Yes, I knocked out Harlan Hickey’s front tooth with a baseball bat, but it was an accident. Promise. His parents did not sue. We were from the same neighborhood.

I am so thankful for my old childhood chums. I am thankful for the lessons I learned whether I wanted to or not. I am thankful that there were no such things as cell phones, iPads, iAnything and only 3 major channels back then because our community was outside with real people who continue to be part of my life.

Real people – not just a symbol on a phone.

Writings to make you Smile and Think. Fawn is an award winning newspaper columnist. She is an avid writer, blogger, and mom. Her advice comes from her years of mothering her eight children.
View all posts by Fawn Musick →
This entry was posted in Posts, Stories / Articles and tagged community, Friends, Neighbors, Nieghborhood. Bookmark the permalink.

1 Response to Lessons From MY Hood